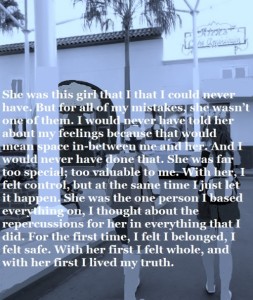 I found this on Queer Secrets, an LGBT Tumblr blog devoted to posting the “secrets” that people send in.  I know what it is like to feel this way about someone, at least to a degree.  My person, however, was a boy.  I will give him the pseudonym Angeline here, because like with Genevieve, I want him to have a pretty name.  Angeline also means “angel”, and he was that to me also.

He was my angel because he was my friend.  I often teased him, and he’d retaliate by chasing me around the yard we all called a playground.  When he was given detention, I skipped my recess to be with him.  When I found out he self-injured, I told Davina (another pseudonym) what was going on.  Davina was the head teacher there, and she told Angeline’s mother, Kaleela (pseudonym), what was happening.  I was known as so close to Angeline that one day, I asked Davina what was wrong with him.  She looked a little hesitant, but led me outside.

“You know that Angeline had a brain tumor when he was very young, right?  Well, that tumor affected his brain in certain ways.  Much like your mother’s stroke affected her.  As a result, Angeline cannot always tell appropriate behavior from inappropriate behavior.  He needs special help for that.  He also has a hard time with reading and writing, just like your mother.”

Angeline was also very accident-prone.  He loved to recite a long litany of accidents he’d been through, such as being smashed between a palm tree and a golf cart and being scratched by coral.  He’d also broken both of his arms and both of his legs at different times.  We loved discussing Israel together, not that we could have very intelligent discussions on the subject.  He taught me some of the Hebrew he was learning in Hebrew School, which I have sadly forgotten.  He also asked his Hebrew teacher if I could attend sometime, and the teacher said yes.  I always wanted to take Angeline up on his offer, but never was able to because I always had volleyball lessons.  Mom was very insistent on me exercising.

What made Angeline so special?  Sure, I loved him.  I knew I didn’t want a romantic-sexual relationship with him, because even though he was only a year younger than me…he looked younger than that.  When Kaleela briefly suggested it to him one day, he actually ran to the nearest hill and screamed for a whole minute and a half without drawing breath.  I was amused when I heard, not hurt.

I didn’t want to tell Angeline I loved him because I didn’t want to cause any confusion or awkwardness between us.  I don’t understand the control thing, and I didn’t exactly think about the consequences for him in everything I did.  But with him I felt like I belonged, and I felt safe and whole.  In fact, there wasn’t a single moment I spent with Angeline that I wasn’t grateful for.

Many years later, I wondered if my love for Angeline had been real, or if it had been mania.  But the thought of my love being mania put me in such emotional pain, that I concluded it must have been real to me.  It may have been one-sided, because when we talk these days (which is hardly ever), it’s small talk.  So that sucks.  Another one-sided bipolar love story, right?

But then I remember Angeline feeding me a carrot on one of my last visits to Davina’s.  I remember him putting his arm around me, on one of the last walks we took together.  I remember when he trusted me with the knowledge that he hit himself.  And he wouldn’t have tolerated my bugging him if he hadn’t at least liked me.  Sure, he may not have “liked” me…but does that really matter all that much?  I had just as much fun with him either way.

Follow
“The seed must rot before it germinates.”
by Ashanti Proverb