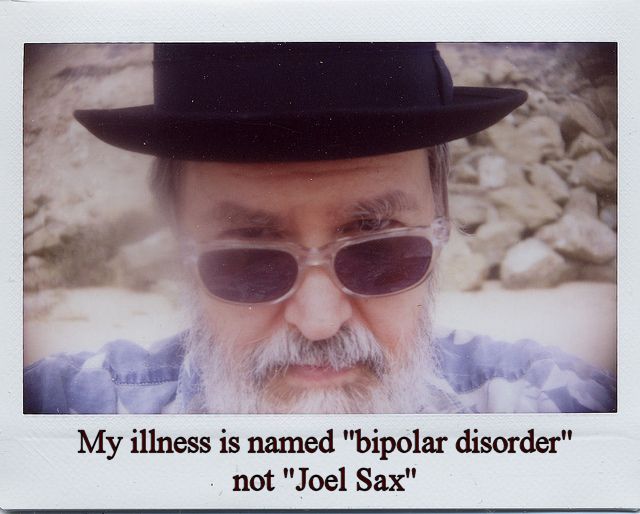 The roller coaster analogy never really spoke to me. I didn’t experience a thrilling ride. It was more like a tornado or a hurricane, a central column of madly swirling air that threw everything in its path asunder only to die and leave a still, bleak landscape of broken trees and shattered homes where no one could live. “Things fall apart,” goes the Yeats poem. “The center cannot hold.” Mania causes us to lose sight of our center and depression causes us to forget that we ever had one.

I count myself fortunate that I never ended up in jail though perhaps some might have made a case for it. Drugs and alcohol, at least, never presented themselves as ways to temper my emotions — I distrusted them. I let whatever flew out of the maelstrom hit me square on and I did nothing to numb the pain except hide in my room or rage unexpectedly.

Bipolar is one of those illnesses that everyone who has watched a Lifetime Channel movie thinks that he or she knows, but they have no clue. The illness doesn’t make us evil. Most of the things that I did in my rages and panics were moved by an innocent heart. I have found the same to be true of others. But often what we do is hurtful. It is no wonder that outsiders see us as brutes. When I have acted with the most vigor and erraticness, I have done so the name of one or another great crusade, marching against problems that often only I could see. Heraclitus once said that “The waking have one and the same world, the sleeping turn aside each into a world of his own.” Bipolar creates in that waking world a sub-world that we who labor with the illness experience on our own. In it we sleep a sleep of wakefulness. Perhaps this is due to the restlessness of mania that keeps us up night after night, day after day.

Eventually things fall apart and we find our minds in bizarre places.

My worst psychotic episode happened when I was working over Christmas break in college. The world became a maze of passageways like I see in my dreams, the doors to the rooms hazy and difficult to find. I believed that I was God and that I had messed up the world. Once that a coworker asked me what was wrong. I did my best to deny that the veils between us did not exist. It was a tricky maneuver but I pulled it off. Every night I returned to my room and found darkness. When the other students returned, I felt less lonely, but I felt I wasn’t one of them. I hid in my room, held my tongue and kept my condition to myself. They knew nothing of my obsession or the distortions that blurred my cognition. Sometimes they would find me staring into space and wonder if I was on drugs. I was stone cold sober. An ill gift of prophecy settled over me. I believed that I could predict what people were going to say. I became sensitive to the occasions when people would utter words that I had encountered in my reading with no connection to the class or the context. My skin jumped at their mention and my shivers from remembering the incidents of my day kept me up. The episode slowly lifted over the semester, though I did have to drop a class.

Sixteen years passed before I sought the aid of a psychiatrist. Eleven more needed to turn over before I started telling the truth about my experiences. Oh the rages, the insomnias, the dark nights of the soul, and the mind-crushing paranoias that troubled me even though I took antidepressants and thought myself cured! The word “bipolar” was, at last, used. During the eleven years of denial, I refused to believe that it applied to me though I numbered it in others. One day in the hospital, it caught up with me, though. The new attachment to my identity electrified me. I read all I could, kept finding myself between the pages, and in the end surrendered to my diagnosis. Then I took my pills as prescribed, dieted, exercised, and broke down the walls that kept the world outside of my dream.

Though my doctors named my condition, my condition was not me. I had always had doubts about this wreck of a brain that always seemed to say and do things against my better judgment. Outsiders sometimes tell me that mood stabilizers erase the personality. They have no clue. When I got on lithium and it started working, I found myself able to be the me that I knew I always was, free of the control of the randomness-loving demon who operated my body like a slot machine whose prizes were shame and sorrow. Over the years, I have added and subtracted more medications to my cocktail until I had a firm foundation upon which I could finally build a brick house. When the madman tried to seize control of my inner weather, I had a series of steps that I could take to seal myself inside my house and wait out the storm. This security enabled me at last to separate myself from my illness. I knew, at last, who I was. Life was no longer a bad dream.

“I’m not bipolar, I’ve just had a bipolar life foisted upon me.”
by Daniel O'Malley