It is Worldwide Bipolar Disorder day (okay so this post is a couple minutes past midnight, but close enough). From what I’ve gathered, we are supposed to show our faces.

But I will do no such thing. My anonymity is essential to my life.

I severely cut myself late November two years ago. I was rushed to the ER by my roommates where I was stitched back up. I was lucky I didn’t hit any major blood vessels. If you look close enough, you can see a large vessel right above the scar. But it was deep enough to see my tendon. At that time, I was in throes of some sort of mood chaos. I hadn’t been diagnosed with bipolar yet. I later found out that my therapist was desperately trying to contact my psychiatrist to get me off those medications immediately because they were making me worse.

Friends would come over for game night, which I didn’t participate in, but I did do my best to be as distracting as possible. I would get into these moods, where I’d laugh hysterically, ramble away. I’d lose myself. I thought I was just having a good time. On occasion I would clean my fish tank with such focus, I demanded perfection, not a drop of dirt (even if some remaining dirt is good), it had to be pristine.

I would prepare myself for studying by taking a knife to my skin. It soothed the thoughts, it soothed the chaos. And when I lost focus, when my friend tutoring me got too frustrating, I would cut myself again to regain focus. Cutting myself worked better than any stimulant I’ve ever taken for focus.

One night we had friends over and I was lost in this person who wasn’t me- but a “better version” of me. She would jump around and entertain everyone. She had the idea to play shirtless Twister. So all the guys did. And then she decided to test her roommate, to see if she had the guts to do it too. She did, with some encouragement. The whole idea was stupid, pointless. But this version of me was so desperate to do something wild, and nothing ever seemed to be enough. My friends were too tame, and that was best for me, even if I hated it.

Another night we were returning from a store and pulling into the campus parking lot when a police officer holding a shotgun stopped us. We were informed there was a gunman on campus and we needed to go elsewhere until he was found.

I found this hilarious.

We went to our friend’s place and I was energized. I was excited about the gunman. My friend’s roommate was rather cute and in the military (which was a big bonus to me), so I tried to flirt with him, I wanted to drink with him. But some part of me was too scared. Some part of me knew I was acting way out of line, and unattractively so. So instead I tried to calm down by laying on the couch and fiddling with my knife, particularly pleased with myself because it made my roommate nervous.

When we were finally cleared to return to campus, I plopped down on my roommate’s bed. I started laughing hysterically. And tears began to stream down my eyes. Between fits of laughter I asked them if they wanted to know something hilarious. They said sure. I laughed as I cried, and hiccuped the words, “My therapist tried to force me to go to the hospital today… Isn’t that hilarious!?!” I stopped laughing, I wiped the tears off my face, and left the room. My friends exchanged concerned glances.

My bipolar has never been the most extreme. Perhaps because I am so young still. The trip to the ER was a changing point though. My parents received the bill, I asked to go into outpatient treatment, and the treatment center decided I needed to be inpatient. Sometime in that process I was diagnosed bipolar, I don’t even remember it.

The paperwork says I was crying and laughing during my initial evaluation. That I said, “I don’t care if I die. And I have 17 knives at home.”

In any case, the whole experience was a wake up call. I still can’t believe the way I acted. The way I told everyone cutting wasn’t a problem, that it was fine, and I was safe. When the reality is that less than an inch made the difference between life and death for me.

But that’s another story.

I think that perhaps I was in a mixed episode for most the beginning of the second year of college. I was so up but I was also so down. I would cut as punishment. I would cut to focus. I would cut if I was happy. I would cut if I simply felt like it. I did it constantly. And the therapist saw what was coming when he tried to force me into the hospital. He saw that ER trip coming.

I know I talk a lot about self harm. For me, it goes hand in hand with bipolar.

I was doing well with abstaining until my last episode, which was this last winter. I had nothing to lose, so I was cutting myself again. My legs still show sleek red lines going in every direction. The mania wanted me to.

With me, there are no neat, clean cut, straight lines. I go to town, slicing and dicing with anger. There is nothing calculated or calm or in control about it. Look at the scars, you’ll see.

The mania also wanted me to vandalize things. I felt as if no one understood what I was feeling. I would wake up fine, but I’d quickly degrade. For some reason, I was possessed by the need to make it worse. So I would take too much Ritalin and I’d drink coffee. I left the house to go to therapy when I came up with a brilliant plan. I was going to go to a popular mall and cut words into the bathroom stall, then cut myself, smear my hand with blood, and leave a bloody hand print right there on the stall wall.

I needed people to know. And not just know- but feel. I was terrified of myself, I couldn’t slow down and I couldn’t stop myself. I wanted someone to walk into that bathroom stall and feel the terror the hand print was sure to elicit.

People had to know.

So I went to a sporting good store and bought a cheap utility knife (since all mine had been entrusted to someone for safe keeping). But the traffic on the freeway caused me to miss my opportunity. I had to go to the psychiatrist and I didn’t have time to stop by the mall.

The idea lingered in my head but I never did it. My therapist said she almost involuntarily hospitalized me for my urges to vandalize.

Another idea I had was to go to the local park and carve words into the trees. It was daytime, so I went for a walk. I casually strolled around the park, stopping to examine trees, trying not to be too suspicious as other people were there. I did hide behind a tree and barely scrawled the words, “Help me” into a tree, but you’d never be able to tell. But I had plans… plans to come back later that night when it would be empty and leave large, blatant messages in prominent trees. I specifically wanted to write, “I’ve gone mad.” Or something like it. And then, in a hidden spot, where only the adventurous would see, I’d leave a secret message, “Help me.”

But when I made an excuse to leave that night, I decided to go to the bookstore before the vandalism. I wandered around the bookstore, I tried to focus on the titles of the books but my vision blurred far too much. I wandered around, paranoid that everyone knew I was not okay. The bookstore overwhelmed me. There were too many books, too many people, too much of everything. So I drove home, back to that park. But I detoured. I saw the Christmas lights. And I drove down a street that was heavily decorated. The euphoria washed over me. I drove around for however long, just admiring the lights. (I’ve never been impressed by Christmas lights, by the way). In the end I decided trees were just too beautiful to ruin with my knife.

Another day it was raining but I was desperate to go soak it in. I told my mom I was going for a walk and grabbed an umbrella. But the rain stopped and I found myself at the park alone. I didn’t know what to do, I didn’t want to carve the trees because it was my good knife (that I paid a lot of money for). So instead I found the swing set. And I popped in some earbuds. The euphoria was intense. But I also had paranoia, so I tucked my knife into my hand, positioning it so I could pop it open in a second and … well, you know.

Of course this was ridiculous, as the closest entrance I had full view of, and an attacker would have to walk across a large open field to get anywhere near me from behind (and I checked constantly).

I could go on about the mania I felt this last winter. It was the first time I knew I was manic. I’m only 21, my episodes aren’t very severe. But I still have many years ahead of me. I know now that my bipolar can take charge at any moment. I had to miss my last quarter of school because I simply went to class high on pills, then I’d cut between classes, and I couldn’t focus. I was just too manic.

I just started my first day of the new quarter. It was terrifying.

I wrote this and it is very disorganized. But that in itself is what mania is for me. It is chaos in my mind.

Mania is a 5’4, 97lb female with dirty blonde hair, brown eyes, an asymmetrical pixie cut, a small assortment of bold ear piercings, and a tattoo on her side rib cage. It is that girl being the life of the party, laughing while crying, cutting herself, plotting to vandalize to make a statement. A girl sitting on her bed, head in hands, her thoughts screaming, “SHUT UP SHUT UP” over and over again, trying to make the whirlwind stop so she could do something as simple as brushing her teeth.

So you want to see the face of a bipolar person? Well I can’t show you that. My career goals don’t allow me to make my disorder public, just yet.

But I’ll compromise. You can see how I intended to look during my vandalism urges (minus the sunglasses).

While some may brave a bare face… my true bipolar face, is not my bare face. 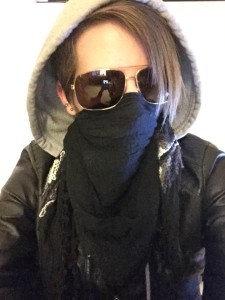 “But, with time, one has encountered many of the monsters, and one is increasingly less terrified of those still to be met.”
by Kay Redfield Jamison