As I write this, I can only begin to imagine the number of people who have jumped to the conclusion that the shooter at the Charleston AME Church was mentally ill. By this time tomorrow, even if the shooter has not been caught, we will hear the pundits debating what kind of disability afflicted the shooter. Undoubtedly there will be more calls for Forced Outpatient Treatment.

There are a few things to keep in mind before we turn Charleston into our reason-to-support-Murphy’s-Law-of-the-day:

Rest assured that the NRA — which backs the Helping Families in Mental Health Crisis Act — will blame this on mental illness at the earliest possible press conference. We’re the scapegoat for this kind of thing every time it happens.

END_OF_DOCUMENT_TOKEN_TO_BE_REPLACED

It’s going to happen again with the same reaction by the media. Maybe we will wake up tomorrow morning and see the report in our morning newspaper; maybe we will hear about it from a coworker at lunchtime; or it will be the lead story of the evening news. Mass murder. Mentally Ill Man. The words will be slung together and dished out to a public which has been bred to believe that mental illness and violence are strongly correlated. Politicians, doctors, family members, and activists will devise plans to cope with the problem. It happened with the Virginia Tech shootings, it happened with the recent Germanwings crash. Autism, bipolar disorder, depression, and schizophrenia have all been implicated at one time or another. The mentally ill cannot be trusted, goes the drumbeat. Schizophrenics and bipolars are killers.

Statistics show that about 3% of the mentally ill are violent. We are ten times more likely to be the victims of violent crime than perpetrators. Yet when we are portrayed on television or the movies, sixty percent of the depictions commit crimes, especially violence. So coupled with the way news outlets spin stories about mass murder, the general public believes that we are ax murderers and serial killers.

Some reformers use this fear to drive some very specific agendas, namely destruction of our rights to privacy, forced medication, and the resurrection of mental hospitals. The objective is to control the mentally ill. They might argue that this is the best we can get in a society with our values, but that is a weak defense of some very problematic and questionable policy changes.

END_OF_DOCUMENT_TOKEN_TO_BE_REPLACED

I’m not wearing this mask because I live with bipolar disorder. I wear it because you fear my real one. 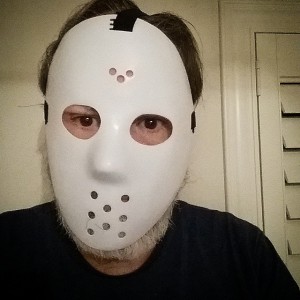 Go to any costume store and you will see plenty of masks purporting to depict psychotics. If you are to believe the manufacturers, we are deformed and rabid creatures that are part animal, part alien, and part degenerate. People buy these with a mind to having a good drunken laugh at my expense and that of everyone who shares my affliction or has another related condition such as schizophrenia, borderline disorder and even depression!

Because of this, we wear another kind of facial covering — invisibility. Coupled with this is Silence. We do not talk about our illness much with outsiders — which can include our members of our own family — it is much too dangerous. You deny us jobs, decent housing, and even friendship because you fear an imaginary ax murderer lurking inside our skins.

END_OF_DOCUMENT_TOKEN_TO_BE_REPLACED

Shortly before my hospitalization for a mixed state came the 2004 election. I crashed and crashed hard after the results. Politics is a fascination of mine but obsessing about it is not my friend. When my expectations are high as they were in 2004 and the hope I feel is unrealized, I take it very hard. The mix of anger and disappointment plus certain medications I was taking for depression at the time pumped me up into a mixed state. One day, when I had enough of it and of other life issues, I texted my last will and testament to my wife and sat down on a log to study my veins for the right place to cut. A timely phone call from my psychiatrist saved me.

The 2004 election was cordial compared to what has happened since 2008. Elements on both side but especially the right have been whipped into a frenzy by their respective leaders. We hear stories of blatant racism and sexism, two faults that have been hidden until the recent elections. We see them not only in the political arena but also in the news media and on the streets of our cities. Some such as Fox News are instigating their viewers to greater and greater heights of denial and fear while others just give the demagogues air time by covering them without comment. We see black men strangled or shot dead with no justice leveled against their killers. And respect for the police — even the good cops — sinks lower and lower.